We are pleased to introduce the new model of the AyrMesh Receiver. This new model represents a significant improvement on the older model while maintaining complete compatibility with previous AyrMesh products. This product combines the proven software from our previous model AyrMesh Receiver with new, more capable hardware. The new AyrMesh Receiver is a bit larger than the old model, and offers several new features:

The ability to mount the Receiver on a flat surface (without additional hardware) is a feature that many users requested over the years, and the ability to add an outdoor PoE device will, we think, enable our customers to enhance security and operational awareness.

As always, we welcome your thoughts, questions, and comments. 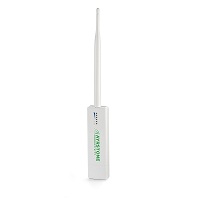 We didn’t invent the idea of putting WiFi on farms and ranches, although I think we’ve done a lot to popularize it. And it’s not really WiFi that’s important, it’s just having a farmwide network that you can connect to and move data with.

When we started, we realized there were two ways we could build out the farm wireless network, and that we’d need to support both ways. However, we had to start somewhere, and we knew that the best short-term “proof of concept” was using the mesh network approach: a bunch of high-power WiFi Access Points that are connected to the Internet and talk to each other using a meshing protocol. That’s what gave rise to the AyrMesh Hub.

Because the Hubs can be up to 2.5 miles apart, it allows you to extend your network out quite a ways from your home place, and that’s useful for a lot of people. It also allows you to “get in the game” for a minimal investment – a few hundred bucks for a Hub and a little time putting it up high and out in the clear gets you WiFi across your farmyard and out into your fields. Then you can extend the network from there with additional Hubs.

However, sometimes you just want to connect someplace into your network, and you don’t need to have WiFi. For those cases, a different approach is optimal: point-to-point microwave links, also known as “bridges.” 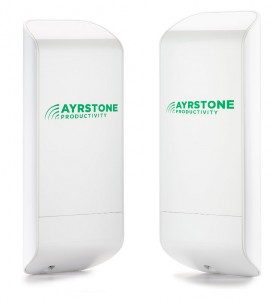 A bridge can use WiFi or a WiFi-like signal to connect two locations and pass data between them. Typically they are “Layer 2” devices, meaning that they work just like a long, wireless Ethernet cable. You plug one radio into your network (typically your router) and then plug the other radio into whatever you want to put on your network (a computer, IP camera, WiFi access point, etc.), and everything works just like it was plugged into your router.

The AyrMesh Bridge uses microwave radios that use the 5.8 GHz. band (used for 802.11 WiFi “a,” “dual-band n,” and “ac”), but they use a special “narrow-band” microwave signal that increases the range, reduces the effects of interference, and makes the signal invisible to WiFi “sniffers.”

Of course, if you are just connecting some distant device or devices into your network, you can also use an AyrMesh Hub and an AyrMesh Receiver. It will actually work the same way; the differences are:

It’s not necessarily an “either/or” thing. Several AyrMesh users are using the AyrMesh Bridge to reposition their Gateway Hub to the top of large structures (e.g. grain legs) to give the Hubs maximum range. A couple of people are using their Hubs for WiFi but providing connectivity to other buildings using Bridges (with the Hub and the Bridge radio mounted next to each other on top of the house or office). And you can use a Bridge connected to a Remote Hub to connect a device several miles away from the Hub.

There are a lot of folks out there selling wireless bridges – we think the AyrMesh Bridge is the best for one important reason: it’s the easiest to set up and use. No configuration is needed: you just connect both radios in the Bridge to your router. They download your configuration from AyrMesh.com and then all you have to do is mount them outside pointing at each other.

The AyrMesh Receiver is actually, of course, more than a receiver – it transmits and receives data – but it is designed as a simple, low-cost way to put one or more “wired” (Ethernet) devices onto an AyrMesh network. It is very similar to our AyrMesh Hub, but with a couple of important differences:

Typical uses for the AyrMesh Receiver include:

The AyrMesh Receiver is available now from Ayrstone – please see our website for details.