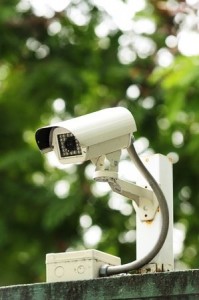 Many people start building an AyrMesh network on their property to provide Internet access across their acreage. However, having an Internet Protocol (IP) network across your property gives you the opportunity to connect devices on the property to help you be more productive, more efficient, safer, and happier.

When I ask people what else they’d like to do with their AyrMesh Network, the first thing that usually comes up is cameras – the ability to see their property remotely.

There are two distinct reasons for putting cameras on your property: the first is what I call “situational awareness” – being able to bring up a view of some part of your farm any time you want. The second is for security – automatically monitoring some view of your property and alerting you when something happens. 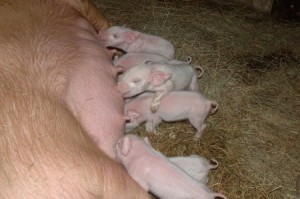 If you have animals on the farm, you probably worry about them – especially if your livelihood is tied up in them. One of the most common uses for cameras on the farm is to be able to check on the animals, whether it’s just so the kids can see the horses when you’re away or if you need to check on farrowing sows, calving cows, or foaling mares to protect your investment. 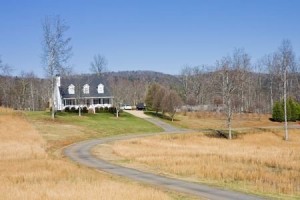 A lot of people also just want to be able to view some part of the property, like the driveway or the kid’s play area, so they can know what’s going on any time. Sometimes these cameras may be dual-purpose, serving both a security function and for situational awareness. 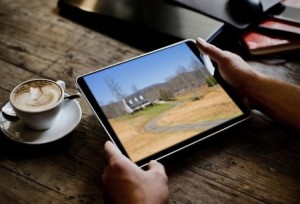 Putting a camera on your property gives you a “view” – you get the IP address of the camera from your router and you can bring up that view from anywhere on your property. Then you can do what’s called a “port forward” on your router to make your camera viewable from the Internet, wherever you may be. For instance, I always forward port 9001 to a camera in my living room. I can look at my public IP address on AyrMesh.com and find that it’s 99.100.101.102 (it’s not, but let’s pretend…), so I just need to point a browser to http://99.100.101.102:9001 and log into my camera (note: you HAVE to have a good, strong password on your camera).

Next we’ll talk a little about the different kinds of IP cameras and the tradeoffs and compromises you can make – see part 2 here. 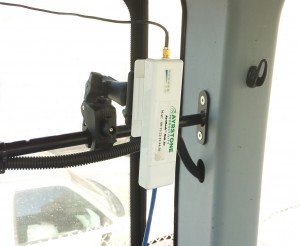 (NOTE: all the pictures in this post can be clicked to see at full-size).

One of the questions we get from time to time is, “What’s the best way to mount the Cab Hub in the cab?” 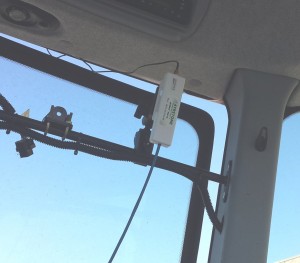 Our friends at RAM Mounting Systems, Inc. offered to help. I’m a big fan of RAM mounts, and I eagerly accepted their offer to help out. I have a RAM mount in my truck with their “X-Grip” mount for my smartphone and a suction cup. I tried mounting the Hub in it, and it did work, but it did not hold the Hub as firmly as I’d like.

The folks at RAM asked one question: “Is it affected by strong magnetic fields?” When I told them it was not, they said, “then let’s try a magnetic mount.” I told him I had a suction cup base in the truck but I didn’t want to use that in a tractor, so he sent me a “Tough-Claw” to attach to the rack in a tractor. But he also sent me a beefier suction cup for use in the truck and elsewhere.

They sent me a package consisting of the following items: 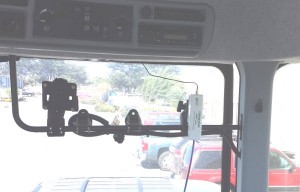 I was able to test this setup on a number of different vehicles. I went to Coastal Tractor in Salinas and they gave me the use of a New Holland T-9 4WD tractor. It was extremely easy to mount the Hub on the tractor’s rack, as shown on the left. The pieces were very simple to assemble and attach to the tubing on the tractor. Here’s a closeup of the mount: 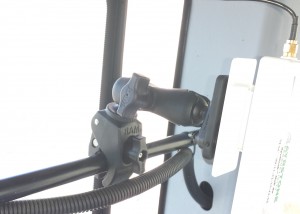 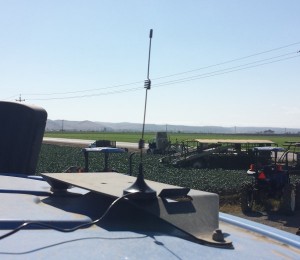 As you can see, it’s attached with nice, large wingnuts. It was not loose and did not slip, but the rubber in the Tough-Grip and the articulation balls on the mount mean that little vibration would be transmitted to the Hub.

I put the Cab Hub Antenna on top of the tractor and plugged it into the utility power plug in the cab, and the installation was complete – it took about 10 minutes (because I had to get out and climb the other side of the tractor to install the antenna). 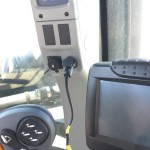 While I was there, I also tried mounting it successfully on an open-cab tractor they had, and put the antenna on the ROPS cage. 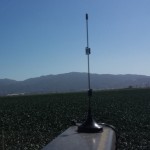 I had not brought along any zip-ties so I could secure the antenna cable to the ROPS, but the power cord plugged easily into the utility plug under the dashboard. 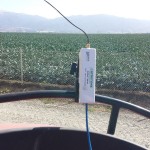 One of the most intriguing uses I have seen for the AyrMesh Cab Hub is actually for use on an All-Terrain Vehicle (ATV), so I  went over to GPSports to take a look at what would be involved. They had one in the service bay they said I could mess with, so I mounted the Hub on it. 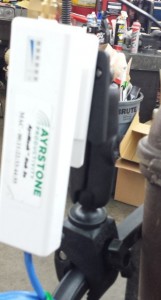 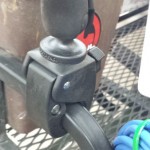 The Tough-Grip was again easy to use on the tubing – the only problem was that there was no place to put the antenna where it would be high, because this ATV had no roll bar. In the parking lot, however, they had some “side-by-side” models, so I made sure the magnetic antenna worked on the roll cage.

My final test was back in the truck – I traded the Tough-Grip for the suction cup and attached the mount to the back window of my “extended cab” pickup. It has been on there for several days now, and has not yet moved. 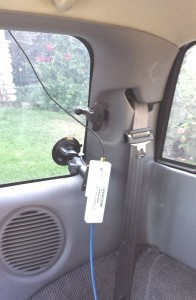 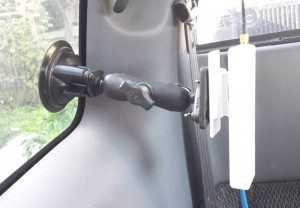 The bottom line on all this is that a small investment in RAM mounts can make mounting your AyrMesh Cab Hub VERY easy in any Vehicle.

Once again, Ayrstone would like to thank the good folks at RAM Mounting systems, Coastal Tractor, and GPSports.