While having WiFi all over the farm is incredibly useful, the only way to make it happen is using Ethernet cables. While Ethernet cables are very simple devices, there are an amazing number of variations and types of Ethernet cables, an choosing the wrong ones (or using them poorly) can cost you time and money.

What is an Ethernet cable? 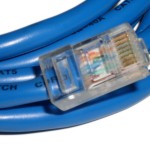 Ethernet cables all have some common characteristics: they contain 4 pairs of wires, with each pair twisted around each other (so they are called “twisted-pair” cables). They have an outer sheath to protect the wires inside and they use RJ-45 connectors to connect to networking devices.

The 4 pairs of wires inside the sheath are usually colored green, brown, blue, and orange – one solid and one striped for each color. The wires are usually 100% copper, but some cheaper cables are made of alloys. Alloy cable works OK for short lengths, but should not be used for cables longer than 25 feet. There is sometimes an uninsulated wire running down the middle of the cable called a “drain wire” – this is meant to provide a common ground for the equipment the cable is connected to.

The wires are usually about 24 gauge (AWG), but some cheaper cables use 26 gauge wire, and some more expensive cables use 22 gauge wire. Obviously, the bigger the wire the better, as long as it’s pure copper, but bigger wire also makes heavier cables. It makes a difference if you’re hauling it up a ladder, believe me.

Under the sheath, some cables have a shield made of metallic braid or foil. This shield keeps outside noise from penetrating the cable and disrupting the signal on the wires. Unshielded cables are designated as “UTP” (Unshielded Twisted Pair), while shielded cables are designated “STP” (Shielded Twisted Pair). Our experience shows that any cable over 25 feet should be shielded to prevent corruption of the data on the wires and maintain the speed of the data.

You will see, shopping for Ethernet cables, that there are several “Categories” of cable – Cat 5, Cat 5e, and Cat 6 are the common ones available now. The differences are in the speed rating of the cables – Cat 5 can pass data at 10 Mbps or 100 Mbps, Cat 5e can pass data at 10, 100, or 1000 Mbps, and Cat 6 can go up to 10 Gbps. Any of these will work well with AyrMesh equipment – we usually buy Cat5e cables because they are less expensive and widely available. The main physical differences in the cables is how tightly the wire pairs are twisted together.

Finally, the sheath itself can differ quite widely. The normal sheath is usually a form of polyolefin, which does not burn easily. “Plenum-rated” and “Riser-rated” sheaths are coated with a low-smoke PVC, which makes them even more flameproof and reduces the toxicity of the smoke if they do catch on fire. “Direct burial” cables generally have a very thick and heavy sheath, and they may contain a gel that prevents a nick or cut in the cable from admitting water into the cable. Obviously, if water gets into the cable, the wires can corrode and the cable will go bad, but direct burial cables are usually very stiff and very heavy, making them extremely difficult to work with.

Whichever cable you choose, it is imperative that you handle it correctly. Because the cable consists of a bunch of small wires, it is really no stronger than any of those wires. It’s very easy to get a kink in a cable when you’re pulling it through a hole, for instance, and break one of the wires. When that happens, the cable is generally useless.