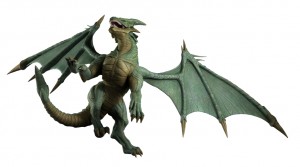 Myths are fun, but this guy won’t help you get the work done.

We have been talking about the myths of Wireless Farm Networking lately, and I wanted to add my own two cents worth here.

The article about the myths is excellent and stands on its own – I strongly suggest you read it. I thought I’d add a little about the topic here, by focusing on three aspects: Wireless, Farm, and Networking.

Wireless – I have seen “wired” farm networks – a number of livestock producers have trenched and buried fiber lines to their livestock buildings (Ethernet can only go 100 yards) for monitoring and control. However, it’s much cheaper now to go wireless, and it gives you much more flexibility. To build a good wireless network on your farm, you have to learn about “line of sight” (or, more correctly, Fresnel Zones) and position equipment so it has both power available and good radio signal from the rest of the network. It used to be that having a private wireless network across your farm was either technically impossible or cost-prohibitive, but we are proving that wrong every day.

Farm – A farm is pretty much defined as being in a rural area, and we’ve all seen that what works in town doesn’t necessarily work on the Farm, and vice-versa. The AyrMesh network is designed for farm use – relatively few people and machines spread out over a relatively large area. There are lots of good solutions for networking in town, where there are a lot of people in a small area, but they will never work as well as a solution designed specifically for the farm.

Network – The Internet Protocol (IP) network is the single, unified data communications medium for this century. I have seen farms that had a wireless link for their weather station, another wireless link for their GPS corrections, a home WiFI system and cellular coverage. Getting rid of the “point-to-point” solutions and putting everything on the network enables you to collect and transmit the data you need more easily, deliver what you need over the Internet, and gives you the option of adding new technologies to your operation quickly and easily.

Some people think this is revolutionary, but I would argue nothing could be further from the truth: this is the result of a clear evolution over time. In the 1970s academicians started tying computers together and transferring data over the first networks. In the 1980s networks came out of academia and started being used for business and even personal purposes; in the meantime, ham radio operators and researchers were starting to send digital data over radio waves. In the 1990s companies started to network their offices to share files and printers, as well as sending emails. Building-to-building microwave links became relatively common, and Industrial Automation moved to IP networks. In the 2000s the consumer internet became a reality, as did WiFi for wireless data, and we all got “on the net.” Now, in the 2010s, we have the Internet of Things and the low cost of high-power wireless networking, making this the decade of Wireless Farm Networking. The ability to monitor farm data and even control farm operations using a local network connected to the global internet will change agriculture forever.

This is me, but I’ll probably never look this good again.

This is what it’s about: Ayrstone on the farm. This is Matt Hughes’s farm in IL

This is a blog about Ayrstone, our products, networking, particularly wireless networking, the internet, farm/ranch management, and whatever else we find interesting. The primary author is Bill Moffitt, President and Chief technical guy for Ayrstone Productivity.

As Ayrstone customers who have spoken to me can attest, my interests are many and varied, but they always circle back to ways to get things done better, cheaper, safer, and more effectively. I am a strong proponent of technology, but I’m not really what you might call an “enthusiast.” I think of myself more as a crash-test dummy: I want to try new things, see what the potential is, and then talk about what I find (good or bad). The nice thing about this is, I hope, I can find things that are genuinely helpful. The bad part, of course, is that you may not always agree with my assessment. But, of course, that’s what makes this interesting: I expect some lively comments and discussions about the relative merits of different approaches here.

Just so you know what to expect, I’m a “machine gun” writer: I’ll go a long time without writing anything, and then I’ll put up several posts in rapid succession.

I welcome your comments, both positive and negative. This world of networking on the farm has a lot of big, new opportunities, and I hope I can help you make the most of it.